You are connected to HI2021, mauruuru and welcome !

Heiva international is the place to be and promises a stimulating, multi-disciplinary
platform aimed at providing competitive and enriching environment.

Join us and take part in an extraordinary event and exclusive ambience.
Culture, ‘Ori and Tahiti ! 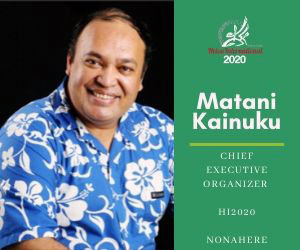 Ia ora na, Matani KAINUKU is the creator and the chief executive organizer of the Heiva International. He is a triple winner of Heiva i Tahiti 2006, 2007, 2008. Today, he has been many times head of judge of Hura tapairu since its creation in 2004, Head of judge of Heiva i Tahiti in 2009, 2015, 2016 and 2017. Devoted to the training of instructors of ‘ori tahiti in Tahiti and internationaly (Mexico, USA, Europe, Japan), he decided to create the concept of Heiva International. He is convinced that Culture is one of the keys to promote F r e n c h P o l y n e s i a ’ s e c o n o m y development and the REO. He loves his work (advicer) and likes his passion and as family, with his spouse MJ and his two boys. Together, they love discovery, travel and share. He is a Profesor by trade. He loves reading, arts, medicine, science, politics, neurosciences, foreign affairs, charities and he likes combating poverty. He admires the spirit of performance, innovation, creation and entrepreneur ! That is how he works for the Heiva International and for his fenua.